Trump’s legal legal team on Monday night opened up an all-out attack on Hunter Biden, son of former US Vice president Joe Biden and Barack Obama on the second day of its defense of the president.

The defense team unleashed White House advisor Pam Bondi to accuse Hunter of cashing in on his powerful father as vice president to take on the role of a board member in a corrupt Ukrainian oil firm, even though Hunter had no previous knowledge or experience in the oil sector.

Trump is being tried in the senate over allegations of abuse of power and obstruction of congress after he allegedly withdrew military aid to Ukraine in exchange for an investigation into his political rival – Joe Biden in a July 25 phone call between Trump and Ukraine’s president Zelensky.

Trump in releasing the transcript of his call with Zelensky, denied any wrong doing saying he wanted to fight corruption in Ukraine following allegations then vice-president Joe Biden’s son, Hunter joined the board of a corrupt Ukranian gas firm, and when the Ukrainian government used an independent prosecutor to investigate the company and Hunter, Joe Biden bragged about holding up a billion dollars from Ukraine until the independent prosecutor was fired. 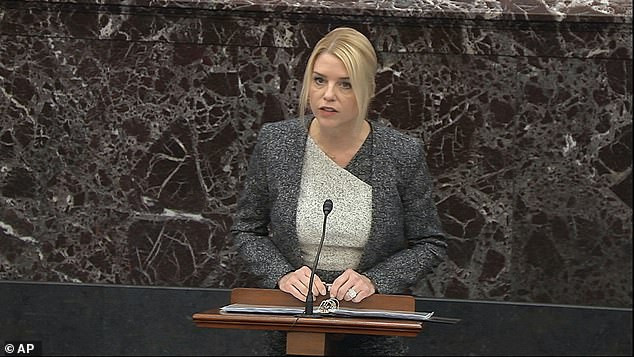 ‘We would prefer not to be talking about this. We would prefer not to be discussing this. But the House managers have placed this squarely at issue, so we must address it,’ Bondi told the Senate, before opening up an attack on Hunter, who joined Ukrainian energy firm Burisma, despite warnings by his business partners that such a move will indicate ‘conflict of interest’.

‘Remember, this is just one month after the United Kingdom serious fraud office opened a money laundering case into Burisma, Hunter Biden joins their board,’ said Bondi.

She brought up Hunter’s fellow business partner Chris Heinz, who backed away from joining the oil and gas firm in Ukraine after disclosures. 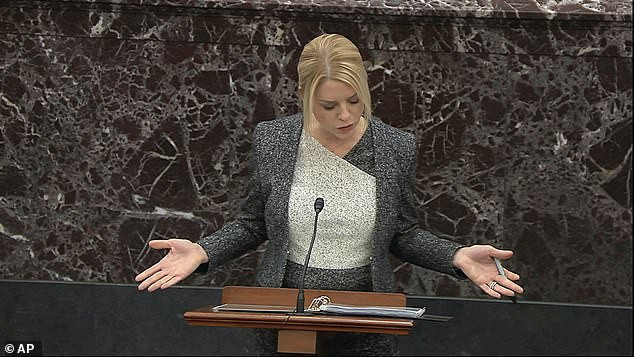 ‘He thought that working for Burisma was unacceptable,’ she said.

Bondi quoting a report on Biden by the Washington Post said;

‘It said the appointment of the vice president’s son to a Ukrainian oil board looks nepotistic at best, nefarious at worst,’ 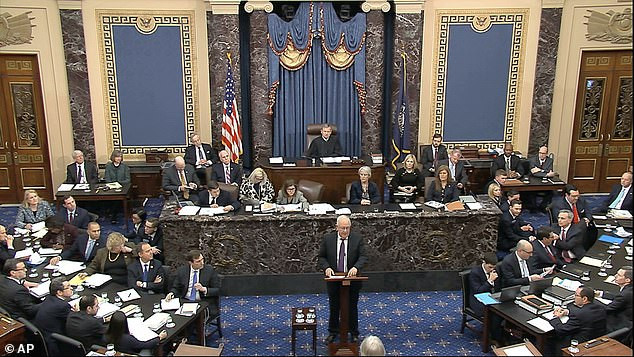 He recalled President Obama’s hot-mic conversation with then Russian President Dmitri Medvedev, who promised to transmit information to ‘Vladimir Putin’ during a conversation about a missile defense treaty in 2012.

Obama told Medvedev in South Korea in 2012  ‘this is my last election,’ and said: ‘After my election I have more flexibility.’ to which Medvedev replied: ‘I understand. I will transmit this information to Vladimir.’ Herschmann then suggested that it could have been used to impeach Obama because it amounted to ‘abuse of power’ then in his presentation he now changed Trump’s name for Obama’s after reading his version of the first article of impeachment – abuse of power.

Starr, who led the impeachment case in the same chamber in 1999, in his own defence, labeled Impeachment as ‘hell’

‘Instead of a once in a century phenomenon, which it had been, presidential impeachment has become a weapon,’

‘There is a huge prudential factor that this trial is occurring in an election year when we the people in a matter of months will go to the polls,’ Starr said.

‘If there is a dispute over documents and witnesses, ‘Then go to court. It really is as simple as that,’ said Starr.

The senate impeachment trial of Trump continues on Tuesday afternoon, with Trump lawyers having one more day to present their case for the president.