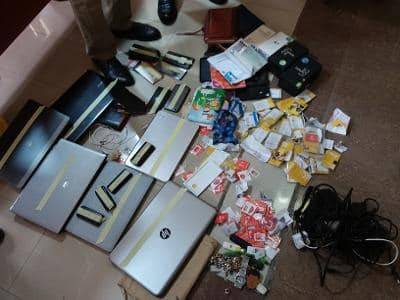 At the time of arrest, it was discovered that the suspects, who were lodging in a 3 bedroom flat, used one of the rooms for their cyber crime activities.

Items recovered from them include: one hundred and twenty three sim cards, including a Turkish sim card, six Laptops, thirteen expensive mobile phones, several books and diaries containing several phone numbers and over three hundred email addresses, amongst others.

They will be charged to court as soon as investigations are concluded.

Clannish clown. Kaduna was once a peaceful state...

No law forbids me from serving as APC...

APC has no senatorial candidate in Yobe North...

Anger in APC over non-refund of nomination fees